The Difference Between A DJ Controller And A DJ Mixer

In this post, I’ll explain what a DJ mixer and a DJ controller are, and how they differ from each other. 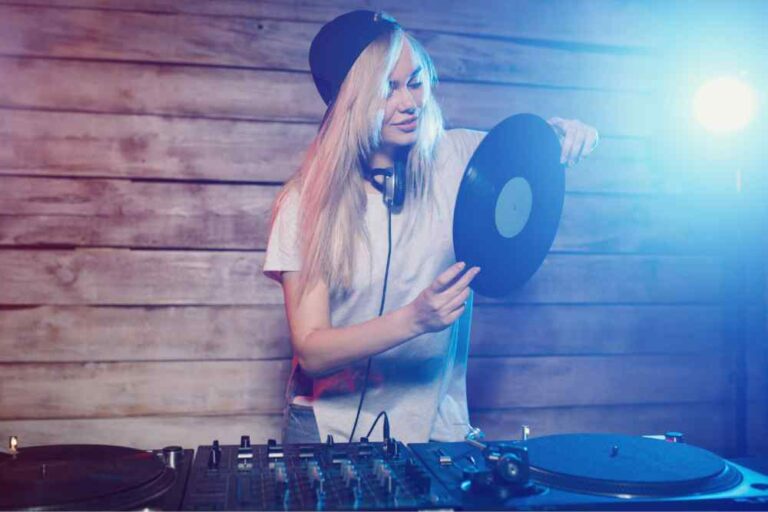 Whether you’re a pro or an amateur, you need to know the difference between a DJ controller and a DJ mixer if you want to be a successful DJ.

We often get asked, “what’s the difference between a DJ controller and a DJ mixer?” The short answer is that they are both controllers—but they serve different purposes.

In this article we will walk through a brief history of both controllers and mixers, detail best practices and uses along with offer the benefits and disadvantages of each.

When you hear “dance music,” what kind of image does that conjure up for you? If you’re over 40 years old, you probably think of a young person with long hair, wearing a tie-dyed t-shirt and bell bottoms dancing around a campfire. But if you’re under 40, you might picture a hipster with a predilection for ironic T-shirts and skinny jeans dancing to a high-tech beat at the best tech startup conference. No matter what your image is, there’s a good chance you have some connection to the world of dance music. That’s because dance music is perhaps the most global of all musical genres. The roots of house music, techno, electro, trance, drum ‘n’ bass, and many other subgenres are firmly planted in Africa, India, and the Caribbean. In the 80s and 90s, it was common for European and American club goers to travel to those regions to experience the real thing. But now, the source of much of the world’s dance music is the internet. There’s a thriving online community of producers, DJs, and fans that has spawned an amazing array of talent. And, just as importantly, it has made this genre accessible to anyone with a laptop or mobile device.

A DJ controller is an electronic device designed to control and manipulate audio and video content. In the beginning, a DJ controller was simply a standalone digital mixer with buttons and knobs that allowed the user to make simple adjustments to the volume and frequency of a music source. With advances in technology, the DJ controller evolved into a digital mixing board that was part of a larger set of devices. With a DJ controller, you can play back any number of audio and video sources, such as a turntable, CD player, DAW (digital audio workstation), VJ software, etc.

Once upon a time, DJs only had two options when it came to controlling the music that played during their sets. They could either use a set of headphones to hear the music from a portable disc jockey (“discman”) player, or they could use a small speaker system that was connected to a radio-like device called a “mixer.” Both of these devices had a few drawbacks. Namely, they were both fairly heavy and cumbersome, and they took up quite a bit of space on the DJ table.

Enter the digital DJ controller. The first one to hit the market was the Tascam DR-05 and it quickly became the standard for a reason: it worked well and it was affordable. However, it didn’t have a USB interface, which made it difficult to connect to computers. This meant that DJs who used the Tascam had to buy additional equipment like the Serato Scratch Live app in order to have a computer-friendly way to control their music.

In 2009, a new digital DJ controller hit the market and it changed everything. It was called the Numark SD-50, and it had a USB connection on the top, which meant that it could be used with any operating system. This controller also featured a nifty trackball that allowed the user to scroll through songs and adjust the BPM (beats per minute) of the music. What a difference this little trackball made!

Before long, almost every DJ on the planet was using the Numark. Why? Because it worked well, it was easy to use, and it was affordable. But there was a problem: The Numark wasn’t made by Numark. It was made by a small company called I-O Digital and they sold it for about 1/3rd the price of a real Numark. Many DJs who were happy with their Numarks decided to keep them instead of buying the superior, more expensive official Numark.

What Can A DJ Controller Do?

A better question may be what does’nt a DJ Controller do. A DJ controller is a device used to control a DJ mixer. It’s basically a joystick with knobs on it that you can push and pull to alter the volume and tone of the music you’re playing. In this video, we demonstrate how to use a DJ controller to mix and master a tune.

The most common functionality of a DJ controller includes Two turntables for each deck Four channels for each turntable Volume and balance controls for each channel A digital display to show the song’s waveform An effects button to apply various sound effects to the song A cross-fader to blend tracks together Software like Serato, Traktor and Rekordbox.

Benefits of a DJ Controller

Mobility – Great to use for travel, they are lightweight and offer lots of functionality.

Saves Space – Compared to traditional vinyl turntable setup, a DJ Controller will save you tons of space.

Mixer Capabilities – Many DJ Controllers have additional mixer functionalities. If the club you are playing already has CDJs setup, you can potentially use your controller as a mixer and use the house CDJs as the controller.

Value – Due to all of the functionality you get from a DJ controller, they have a great price to performance ratio.

What is a DJ Mixer?

A DJ Mixer is a standalone device, it’s not necessarily reliant on DJ software and a laptop to play music. A mixer allows the DJ to connect a variety of devices including vinyl turntables, CDJs, DJ samplers, and beat pads.

DJ Mixers contain a minimum of 2-channels and are very common with 4-channels, sometimes more. DJ Mixers have very similar controls and features of DJ Controllers. The key differences are that they don’t contain turntable jog wheels and rely on separate turntable devices to be connected to play and mix music together.

What Does a Mixer do for DJs?

A DJ mixer allows DJs to connect vinyl turntables, CDJs, DJ samplers, beat pads, and guitar FX units. The main point of difference here is that a mixer is versatile at allowing DJs to mix music from different formats. Control of EQ, channel levels, and effects allow DJs to mix and blend songs together.

The Difference Between A DJ Controller And A DJ Mixer

As we have seen, there are some key differences between DJ Controllers and DJ Mixers, below we detail the benefits of each.

Versitility – allows the DJ to connect a variety of devices including vinyl turntables, CDJs, DJ samplers, and beat pads.

Not reliant on DJ software

In conclusion, A DJ controller (or mixer) is a piece of equipment used to control the mixing of music. It usually comes with two faders and three buttons for controlling volume, pan, and more. It is designed to allow DJs to mix multiple tracks together at the same time. It also has a number of additional functions such as EQ, reverb, and effects like reverb. A mixer is offers great versitility by allows us to connect a variety of DJ devices and does not rely on DJ software.

We hope you enjoyed the details on the Difference Between A DJ Controller And A DJ Mixer. Let us know which you use in your setup or if you are using both in the comments below.

Hi, I am an avid music production junkie and been producing and recording music for the past 10 years. I love testing our and trying new audio software to find new sounds and beats for my music. I hope you find some great tips here at Need A Name Music and come visit often.
More from this author

We may be struggling for a name but we have no issues sharing with you the best tips and tricks to get the most out of your recording sessions. See any of the site info links below to learn more about us.