What Does A DJ Controller Do?

If you haven’t jumped on the bandwagon yet and started using a DJ controller, you are truly missing out. They make using being a DJ so much easier. In this article, we will do a … 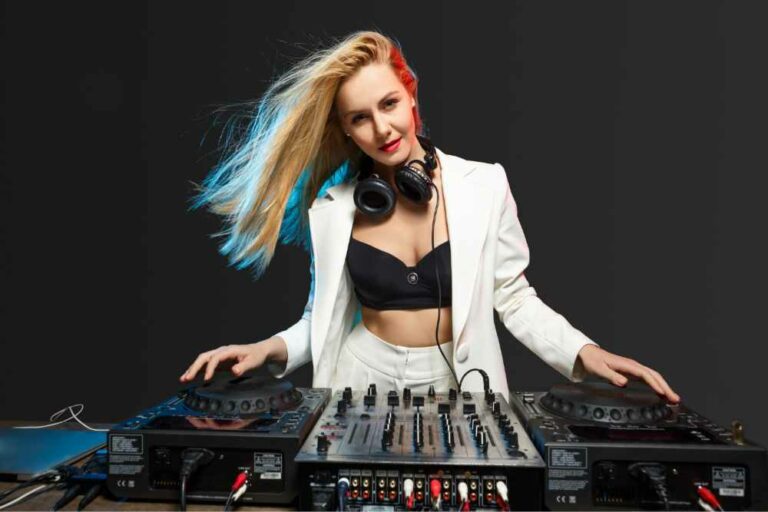 If you haven’t jumped on the bandwagon yet and started using a DJ controller, you are truly missing out. They make using being a DJ so much easier.

In this article, we will do a quick overview of what a DJ Controller actually does, why it’s important, and how to use it. A DJ Controller allows you to control your CDJ or DJ software, allowing you to mix your music as if you were in a club!

DJs use a DJ controller to mix the songs they are playing. In other words, it enables them to put together the song sequence of a particular music track. Read on to find out everything you need to know about this awesome DJ instrument.

If you have a music background, you’re probably familiar with the turntable. This was the first DJ controller, invented in the 1940s and the first one that DJs used. It was a mechanical device and the DJ would spin a vinyl record on top of it. It was also a very bulky piece of equipment that was difficult to move around and was more of a novelty than a tool. In the early 2000s, the CDJ was created. This was a compact digital DJ controller that had all the features of the turntable plus a few extra ones, including pitch control.

A DJ controller is an electronic device designed to control and manipulate audio and video content. In the beginning, a DJ controller was simply a standalone digital mixer with buttons and knobs that allowed the user to make simple adjustments to the volume and frequency of a music source. As technology advanced, the DJ controller evolved into a digital mixing board that was part of a larger set of devices. The latest generation of DJ controllers now allow the user to access any number of audio and video sources, such as a turntable, CD player, DAW (digital audio workstation), VJ software, etc.

What Does a Controller do for DJs?

A DJ controller is a piece of DJ equipment that lets you connect your laptop computer to a mixer (or turntable) and controls the functions of the music played on your system. It’s like having another pair of hands to help you make mixes.

This is a must-have item for any electronic music producer. It’s an all-in-one solution for DJing and recording audio, plus it has several useful but unique features for music production.

Benefits of a DJ Controller

These devices are great for traveling with, being generally lightweight and easy to carry to different gigs. They give good appeal to a lot of people who use them in traveling. Setting up older, more traditional equipment, like turntables or even CDJs can take a lot more effort in transportation and setup time, for example if you DJ at weddings or parties.

This is a great space-saver for beginners who are just starting out. It’s compact and requires very little space. Traditional setups such as a 2 or 4 channel mixer with vinyl turntables take up way more space than a DJ Controller.

The flexibility of being able to use a mixer instead of a fader for mixing tracks together is great, especially if you’re playing a location that has CDJs already setup. You can plug your controller into the existing CDJs and use the controller as a mixer. Using a DJ Controller with mixer capabilities lets you do this.

It’s important to know what you should be prepared to pay for DJ equipment. It may surprise you that there is such a big difference in price between low-end and high-end controllers. Don’t forget that if you buy second hand equipment then it could be substantially cheaper.

It’s not just about the money. In fact, often the most expensive option is not the best option. Don’t get me wrong, there are plenty of affordable controllers out there, but in many cases the more you spend the better the experience you will have.

Below is a great overview video of the new Pioneer DJ XDJ-RX3 Digital DJ System and some of the functionality a controller offers.

In conclusion, A DJ controller (or mixer) is a piece of equipment used to control the mixing of music. It usually comes with two faders and three buttons for controlling volume, pan, and more. It is designed to allow DJs to mix multiple tracks together at the same time. It also has a number of additional functions such as EQ, reverb, and effects like reverb. On top of all the functionality, a controller can also be used as a mixer giving it a high price to performance ratio.

We hope you enjoyed the article and picked up some tips on how great of an instrument the DJ Controller is. As always, we welcome your feedback, leave us a comment below to let us know your thoughts.

Hi, I am an avid music production junkie and been producing and recording music for the past 10 years. I love testing our and trying new audio software to find new sounds and beats for my music. I hope you find some great tips here at Need A Name Music and come visit often.
More from this author

Choosing the Right Cartridge for Your DJ Turntables

We may be struggling for a name but we have no issues sharing with you the best tips and tricks to get the most out of your recording sessions. See any of the site info links below to learn more about us.